According to reporting by AZ Central, police and fire departments throughout the cities and towns in Maricopa County have been “waiting for days on N95 face masks and other protective gear.”
While the wait is unbearable, what is potentially criminal is that the vendor supplying these masks and protective gear, called Galls, has reportedly marked the price of these items 500 percent.
Arizona House Representatives Ruben Gallego and Greg Stanton have sent a letter to the Attorney General and Federal Trade Commission Office to protest Gall’s price gouging and call for a criminal investigation into the matter.
In the letter, shared by television journalist and commentator Brahm Resnik on social media, the Representatives wrote:
“……We have learned that a vendor who regularly supplies the City of Phoenix Fire and Police Departments with life-saving medical supplies is attempting to charge the city nearly 600 percent more per N95 mask than the city was charged for the same equipment as recently as two weeks ago. This is price gouging, plain and simple, and we respectfully request the Department of Justice and Federal Trade Commission open investigations immediately. In addition, this vendor is requiring significant pre-payment for the masks rather than the standard practice of billing upon receipt which leaves our first responders at further risk – and unable to turn to a different vendor – if the equipment is not delivered on time…. We understand that some departments are days or weeks away from running out of much-needed personal protective equipment. Profiting from the coronavirus pandemic – especially in a manner that places our first responders in harm’s way – is morally indefensible, and we commend the President for recently issuing an Executive Order to combat price gouging. We respectfully encourage your prompt attention to this matter and for your agencies to deliver justice for our first responder.”
There Should be a Special Place in Hell for People who Price Gouge during a Pandemic.
The first responders are the people who risk their lives to save others every day.
No one should take advantage of them or the people they serve during a public health emergency.
The people who are perpetrating this scam on the people of Arizona belong in prison.
The 2016 Popular Vote Loser bears some responsibility for this as well.
While Mr. Trump has issued the Executive Order to combat price gouging, this behavior, along with other vendors launching a, what New York Governor Andrew Cuomo calls an “E Bay” bidding war among states in need, would not be occurring if the President of the United States fully invoked the Defense Production Act.
He should have formalized that weeks ago and it needs to be done without delay.
The American People should not be at the mercy of avaricious war profiteers.

They will remember who allowed it if nothing is done in 216 days.

https://blogforarizona.net/there-should-be-a-special-place-in-hell-for-people-who-price-gouge-during-a-pandemic/?fbclid=IwAR1XsjJW9YWLJNgPUpk0hENLGPui76wsO1l31Fb4kQfdgq4X-EJvDQpowAI
at April 02, 2020 No comments:

With Donald Trump making misleading (okay lying) about the state of the Coronavirus and his Administrations reaction to it over the last two months (including just yesterday, March 29, when he lied to reporters from PBS and CNN saying he did not make comments recorded on video the preceding Friday,) some of his most devoted zealots have gone on the social media attack against those who have corrected the Liar in Chief’s nonscientific/nonreality based assertions.
Dr. Anthony Fauci is among the experts targeted by the Anti Science Trump Zone residents. In an article from New York Times reporters Davey Alba and Sheera Frenkel, individuals from right-wing fringe groups such as Judicial Watch and QAnon have criticized Dr. Fauci for his scientifically-reality based comments contradicting the pronouncements of Mr. Trump, his body language at recent daily briefings, and his perceived support for Hillary Clinton.
Despite these attacks from the residents of Trump Zone and Fox Island, Fauci and the others have not backed down from relying on scientific facts and projections.
These attacks on the critics of Mr. Trump echo earlier attacks on Scientists in the Climate Change Camp. New York Times columnist Paul Krugman’s March 28 column deals with this manifestation of this anti-scientific movement among the gullible fringe first with regards to climate change and now with the Coronavirus.
Of course, these people have been encouraged by (as mentioned earlier) the outlandish claims of the Demagogue Prima Donna in the White House they blindly worship.


They believe him when he says the virus is no big deal.
They believe him when he says the miracle cure is about to be released to the public.
They believe him when he says the country will open up again by Easter.
They continue to believe him even after he is caught saying lie after lie after lie.
Speaking on the March 29 broadcast of Meet the Press, Democratic Presidential Candidate Joe Biden spoke for many in the country by saying the obvious:
“Look, the American public is really strong and tough. The first thing we should do is listen to the scientists. Secondly, we should tell them the truth. The unvarnished truth. The American people have never shied away from being able to deal with the truth. The worst thing you can do is raise false expectations and watch them get dashed. Then they begin to lose confidence in the leadership. So we should just tell the truth as best we know it. As best the scientists know it. We should let them speak.”
They do not even hold him accountable when his slow reaction to the Coronavirus has led to needless deaths among the American People. Speaker Nancy Pelosi has pointed that out, saying “his denial at the beginning was deadly…. (as he)fiddles, people are dying.” Writers like fellow blogger Michael Bryan have written about it.
Donald Trump played chicken with Scientific Truth.
He lost.
So have the American People.
Fortunately, it is not too late for Mr. Trump and his fanatical followers to turn things around for the country.
Extending the social distance guidelines until the end of April is a step in the right direction.
He needs to shut up and do more by relying on what the scientific experts say.
People will appreciate him more if he does that. 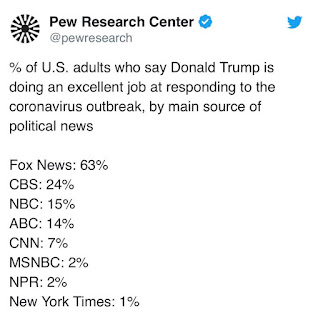 Email ThisBlogThis!Share to TwitterShare to FacebookShare to Pinterest
Labels: Graphic

Cartoons of the Week from Blog for Arizona

Email ThisBlogThis!Share to TwitterShare to FacebookShare to Pinterest
Labels: Shields and Brooks, Video

Has anyone ever wondered why people like Vice President Mike Pence, Dr.Anthony Fauci, the Surgeon General Jerome Adams, FEMA Director Pete Graynor, and Governors like  Andrew Cuomo have to continually kiss the Stable Genius’s tukas (butt) at daily briefings?

Apparently, because that is how you get the Prima Donna Mad King in the Oval Office to act for the betterment of the people and the country.
Today, Individual One showed what he thinks of people who do not blow sunshine up his butt.
During the daily briefing on the Coronavirus, the 2016 Popular Vote Loser did not disappoint the media who regularly count on him spewing bull fecal matter statements. Included in his Trump Zone comments was his moaning that Governors like Washington’s Jay Inslee (who the Commander in Chief referred to as a failed Presidential Candidate) or Michigan’s Gretchen Whitmer (who the chauvinistic President with over 20 sexual assault accusations referred to as the woman) did not appreciate all he and the Federal Government were doing to help their states. He even said the Vice President should not even telephone them because “they don’t treat you right.”  The Mad King also repeated that the Federal Government is doing the work the State Governors should be doing.


Later the third President in American History to be impeached showed his great immaturity towards people that do not sing his praises (the ones who voted to impeach and convict him) by not inviting any Democrat to the signing of the bipartisan $ two trillion economic rescue plan. The only nonwhite person present was Secretary of Transportation Elaine Chao,  wife of Political Prince of Darkness-Grim Reaper-Enemy of the People-Moscow Mitch McConnell.


Presidents should not aspire to lead so people can behave like sycophants and tell them, truthfully or otherwise, how great they are.
Presidents should aspire to lead so they can serve the people and make the country a better place than it is when they are first inaugurated.
Donald Trump has never understood that goal of leadership as part of his job description.
He also does not understand that Governors like Whitmer or Inslee do appreciate him.
They appreciate that he is the Prima Donna Mad King that they are stuck dealing with for at least the next ten months.
They appreciate that he is the self-absorbed huckster and blowhard that they have to put up while hoping (praying) the adults in the room like those from the Center for Disease and Control, Health and Human Services, the FEMA Director, and the Army Corp of Engineers (who the Governors really are grateful to) can help the people in their states in some coordinated method that does not involve state leaders competing against each other for vital medical supplies.
They appreciate that virtually nothing from the Liar in Chief’s mouth is true and they have to wait to hear from other people inside the Administration (sometimes minutes after the President leaves the briefing) for the science-based reality outside the Trump Zone.
The Mad King wants a little appreciation.

People want a President who will tell the truth, lead with an inclusive hand out to others, and work for them and move the country forward from this crisis.


https://blogforarizona.net/the-prima-donna-mad-king-wants-a-little-appreciation/
at March 27, 2020 No comments:

Editorial Cartoons of the Week 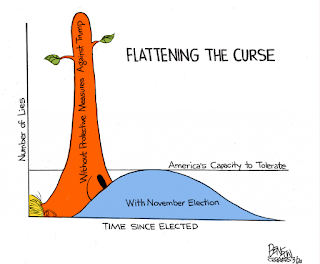 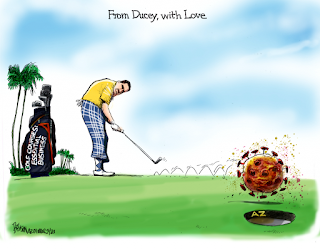 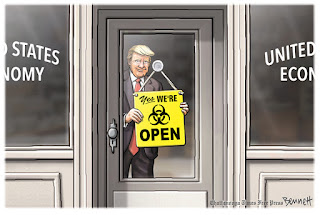 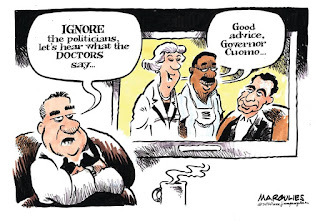 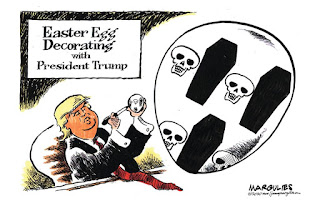 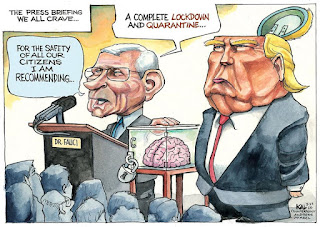 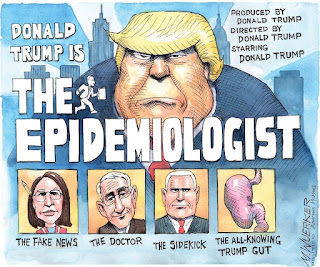 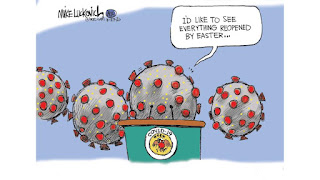 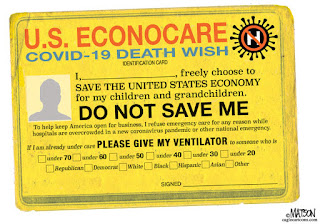 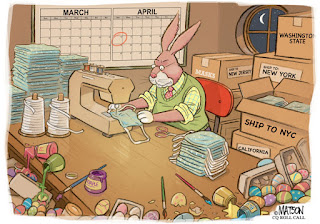 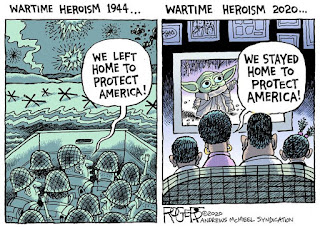 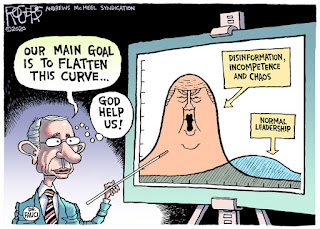 According to reporting by  AZ Central , police and fire departments throughout the cities and towns in Maricopa County have been  “waiting ...